When it comes to our nation’s commander in chief, we Americans have a lot to be ashamed of.

Though Trump talks a lot about supporting the U.S. military, his actions both before and during his presidency indicate not only his lack of understanding of military affairs, but his utter contempt for the men and women who serve. 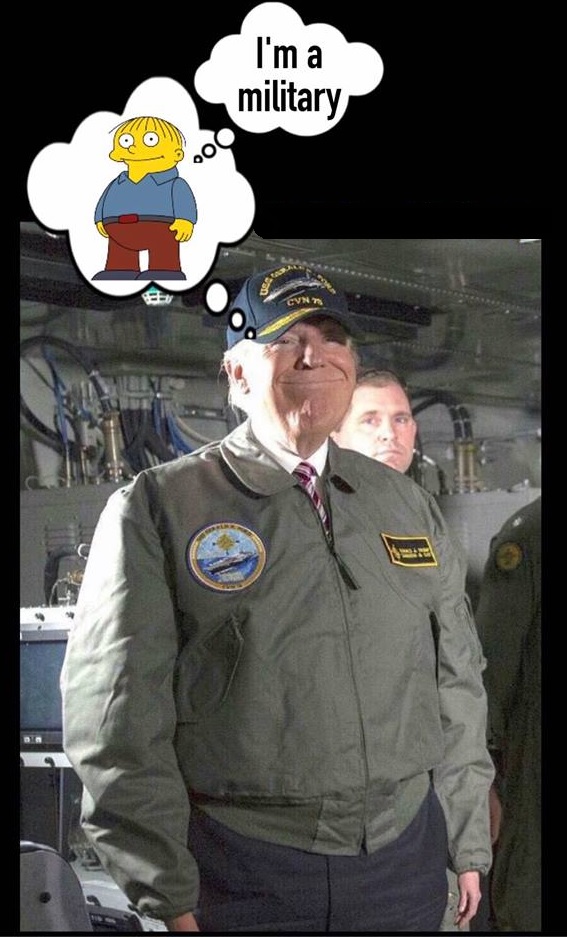 ✓ Claims that the U.S. Army “took over the airports” during the Revolutionary War and the War of 1812.

✓ Requests that all of the military’s Joint Chiefs of Staff attend his over-the-top July 4 parade; most of them make sure to be “on leave or traveling” so they don’t have to attend.

✓ Uses his D-Day interview at cemetery commemorating fallen US soldiers to attack a Vietnam veteran (June 6, 2019)

✓ Starts his D-Day commemoration speech by attacking a private citizen (Bette Midler, of all people) (reported on June 4th, 2019)

✓ Made 2nd wife, Marla Maples, sign a prenup that would have cut off all child support if Tiffany joined the military (reported on June 4th, 2019)

✓ Turns away US military from his Memorial Day speech because they were from the destroyer USS John S. McCain (May 27, 2019)

✓ Purges 200,000 veterans healthcare applications (due to known administrative errors within VA’s enrollment process and enrollment system) (reported on May 13, 2019)

✓ Refuses to sign his party’s funding bill, which shuts down the government, and forces a branch of the military to go without pay (but his appointees got a $10,000 pay raise). This branch of military is forced to work without pay, otherwise they are AWOL (Dec 22, 2018 – Jan 25, 2019)

✓ Bans service members from serving based on gender identity (Jan 22, 2019)

✓ When a man was caught swindling veterans pensions for high-interest “cash advances,” Trump’s Consumer Financial Protection Bureau fined him $1. As a reminder, the Trump administration’s goal was to dismantle the CFPB, installing Mick Mulvaney as the director, who publicly stated the bureau should be disbanded. (Jan 26, 2019)

✓ Increases privatization of the VA, leading to longer waits and higher taxpayer cost (2018)

✓ Finally visited troops 2 years after taking office, but only after 154 vacation days at his properties (Dec 26, 2018)

✓ Reveals covert Seal Team 5 deployment, including names and faces, on Twitter during visit to Iraq (Dec 26, 2018)

✓ Gets three Mar-a-Lago guests to run the VA (unknown start – present, made well-known in 2018)

✓ Calls troops on Thanksgiving and tells them he’s most thankful for himself (Thanksgiving, 2018)

✓ Cancels Arlington Cemetery visit on Veterans Day due to the rain (Nov 12, 2018)

✓ Doesn’t visit US cemetery marking the end of WWI due to the rain (but other world leaders go anyway) (Nov 10, 2018)

✓ Uses troops as a political prop and sends troops on a phantom mission to the border and makes them miss Thanksgiving with their families (Oct-Dec, 2018)

✓ Stops using troops as a political prop immediately after the election. However, troops remain in muddy camps on the border (Nov 7, 2018)

✓ Sends commandos into an ambush due to a lack of intel, and sends contractors to pick them up, resulting in a commando being left behind, tortured, and executed. (Trump approved the mission because Bannon told him Obama didn’t have the guts to do it) (Oct 4, 2017)

✓ Says he knows more about ISIS than American generals (Oct 2016)

✓ Accepts a Purple Heart from a fan at one of his rallies and says: “I always wanted to get the Purple Heart. This was much easier.” (Aug 2, 2016)

✓ Sends funds raised from a January 2016 veterans benefit to the Donald J Trump Foundation instead of veterans charities (the foundation has since been ordered shut because of fraud) (Jan, 2016)

✓ For a decade, sought to kick veterans off of Fifth Avenue because he found them unsightly nuisances outside of Trump Tower. “While disabled veterans should be given every opportunity to earn a living, is it fair to do so to the detriment of the city as a whole or its tax paying citizens and businesses?” – 1991

✓ No Trump in America has ever served in the military; this spans 5 generations, and every branch of the family tree. In fact, the reason his grandfather immigrated to America was to avoid military service

✓ Lied about reducing veteran suicides. A report by the Government Accountability Office in December found the VA spent just $57,000 out of $6.2 million available for suicide prevention efforts, due in part to leadership turmoil at the agency

✓ Lied about North Korea cooperating on the return of the remains of U.S. troops. No remains of U.S. service members have been returned since last summer and the U.S. suspended efforts in May to get negotiations on the remains back on track. The Pentagon’s Defense POW-MIA Accounting Agency, which estimates that 5,300 Americans were lost in North Korea, “has not received any new information from (North Korean) officials regarding the turn over or recovery of remains,”