With fewer than 100 days until Election Day, I still hear Trump supporters ask “Do you have any actual evidence that Trump is a racist?”

Um. Yeah. There’s a little bit of evidence out there. Let’s scratch the surface, shall we?

One day after a black activist was kicked and punched by voters at a Donald Trump rally in Alabama, Trump tweeted these racially loaded and incorrect murder statistics: 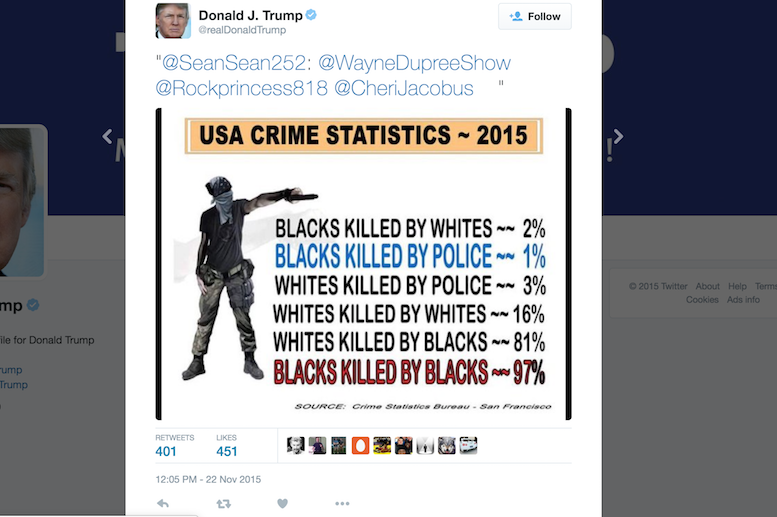 Like much of what he Tweets, it was wrong. The Tweet falsely claimed that black people are responsible for 81 percent of white homicides. Trump retweeted the meme from a white supremacist Twitter feed that has a modified swastika as its logo.

The “Crime Statistics Bureau” supplied as a source doesn’t exist. Not that Trump or his voters would know that.

Trump’s Team? You Guessed It. Racists.

In the weeks following the leak of the emails, at least 75 members of Congress, including key leaders of several Congressional caucuses, called for Miller to resign.

1. The US held a record number of migrant children in custody in 2019. https://t.co/xnjQQhsrOH

3. One of the president’s senior advisors is an avowed white supremacist. https://t.co/zu9k6rrgiM

Trump Is Anti-Latino As Well

—Domingo Garcia, the national president of the League of United Latin American Citizens.

“President Trump frequently refers to Latinos in the most hateful and bigoted ways, and words matter. Having just visited El Paso and hearing first-hand from the victims of the tragic shooting there, I know that hateful words have hateful consequences, and can result in violence and even death.”

When Trump was serving as the president of his family’s real estate company, the Trump Management Corporation, in 1973, the Justice Department sued the company for alleged racial discrimination against black people looking to rent apartments in Brooklyn, Queens and Staten Island.

Federal investigators also gathered evidence. Trump employees had secretly marked the applications of minorities with codes, such as “No. 9” and “C” for “colored,” according to government interview accounts filed in federal court. The employees allegedly directed blacks and Puerto Ricans away from buildings with mostly white tenants, and steered them toward properties that had many minorities, the government filings alleged.

Long before calling Mexican immigrants “criminals” and “rapists,” Trump was a leading proponent of “birtherism,” the racist conspiracy theory that President Barack Obama was not born in the United States and is thus an illegitimate president. Trump claimed in 2011 to have sent people to Hawaii to investigate whether Obama was really born there. He insisted at the time that the researchers “cannot believe what they are finding.”

Trump looks the other way when white supremacist groups and their violent supporters rally for him.

Trump sidestepped opportunities to renounce white nationalist and former KKK leader David Duke, who told his radio audience that voting for any candidate other than Trump is “really treason to your heritage.”

Neo-Nazi groups rallied for Trump. His white supremacist fan club includes the Daily Stormer, a leading neo-Nazi news site; Richard Spencer, director of the National Policy Institute, which aims to promote the “heritage, identity, and future of European people”; Jared Taylor, editor of American Renaissance, a Virginia-based white nationalist magazine; Michael Hill, head of the League of the South, an Alabama-based white supremacist secessionist group; and Brad Griffin, a member of Hill’s League of the South and author of the popular white supremacist blog Hunter Wallace.

A leader of the Virginia KKK who is backing Trump told a local TV reporter, “The reason a lot of Klan members like Donald Trump is because a lot of what he believes, we believe in.”

“I urge all readers of this site to do whatever they can to make Donald Trump President … ” Trump is “the only candidate who is even talking about anything at all that matters.”

— Andrew Anglin, publisher of the neo-Nazi site Daily Stormer and skinhead who has an Aryan “Black Sun” tattoo on his chest talks about the inferior “biological nature” of black people.

Trump’s plan to deport immigrants and end birthright citizenship was called “a revolution” and Trump “is saying what White Americans have been actually thinking for a very long time.”

Discrimination Against Black People is a Pattern For Trump

“When Donald and Ivana came to the casino, the bosses would order all the black people off the floor,” Kip Brown, a former employee at Trump’s Castle, told the New Yorker for a September article. “It was the eighties, I was a teen-ager, but I remember it: they put us all in the back.”

“And isn’t it funny. I’ve got black accountants at Trump Castle and Trump Plaza. Black guys counting my money! I hate it,” O’Donnell recalled Trump saying. “The only kind of people I want counting my money are short guys that wear yarmulkes every day.”

“I think the guy is lazy,” Trump said of a black employee, according to O’Donnell. “And it’s probably not his fault because laziness is a trait in blacks. It really is, I believe that. It’s not anything they can control.”

In 1989, Trump took out full-page ads in four New York City-area newspapers calling for the return of the death penalty in New York and the expansion of police authority in response to the infamous case of a woman who was beaten and raped while jogging in Manhattan’s Central Park.

The convictions were vacated years later when the real rapist admitted attacking the jogger and his DNA was matched to the crime. The city paid millions to the African-American teens to settle their lawsuits.