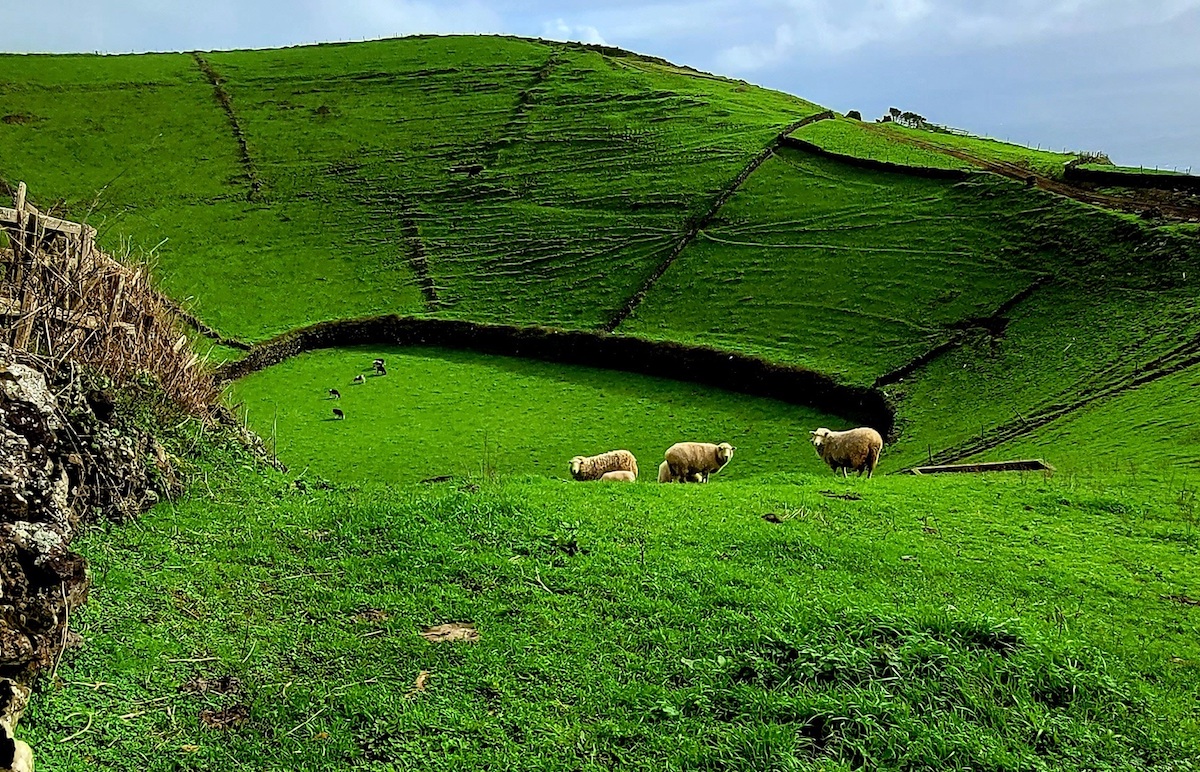 Today Alicia and I did a fun walk through Ribeirinha, Feteira, and a lot of cow pastures on our way to Pico da Dona Joana.

Wikipedia explains it in dry statistical language as:

… a volcanic cone of basaltic slag, consisting of relatively coarse black pyroclastics, of the type called black bagacin. The cone, with an almost circular base and about 500 m in diameter, is gutted towards the southwest, with the exposed part of the crater at an elevation of approximately 262 above mean sea level. The highest part of the cone, on the north and northeast ridge, reaches an altitude of 331 m.

We began our walk around noon in Ribeirinha, parking our scooters by the Império do Espírito Santo. 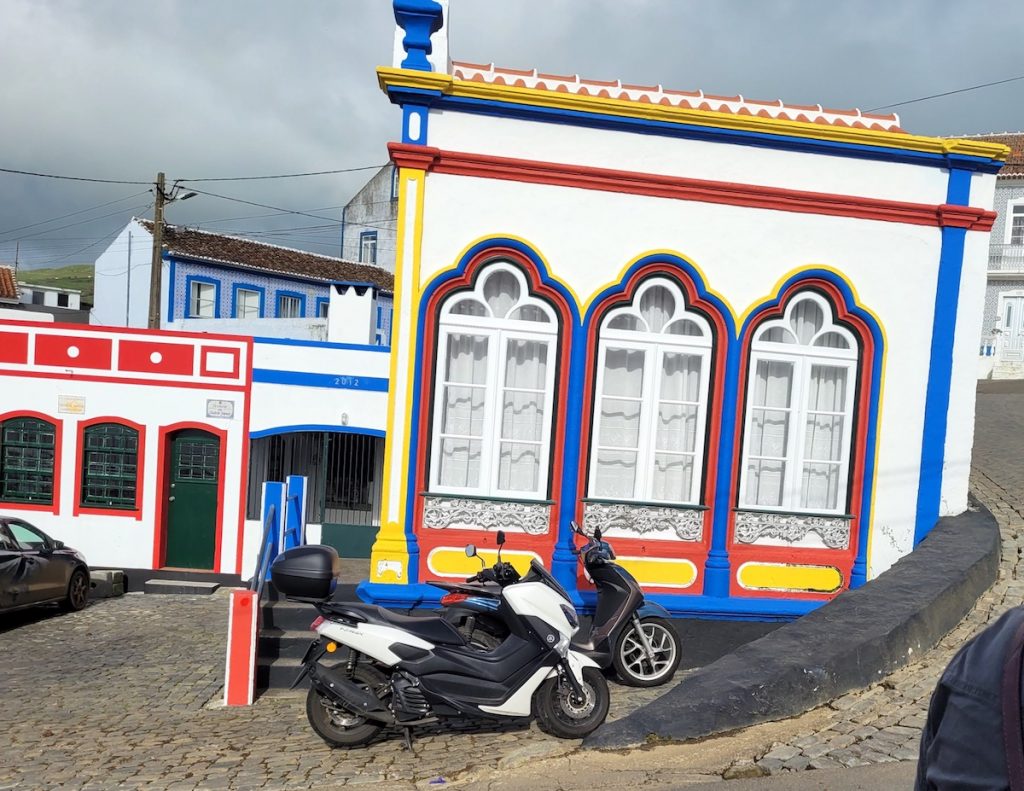 We turned the corner, walking up the hill, and immediately saw some beautiful homes with tiled exteriors (April 2010 Google Maps image here shows they haven’t changed much in 12 years). 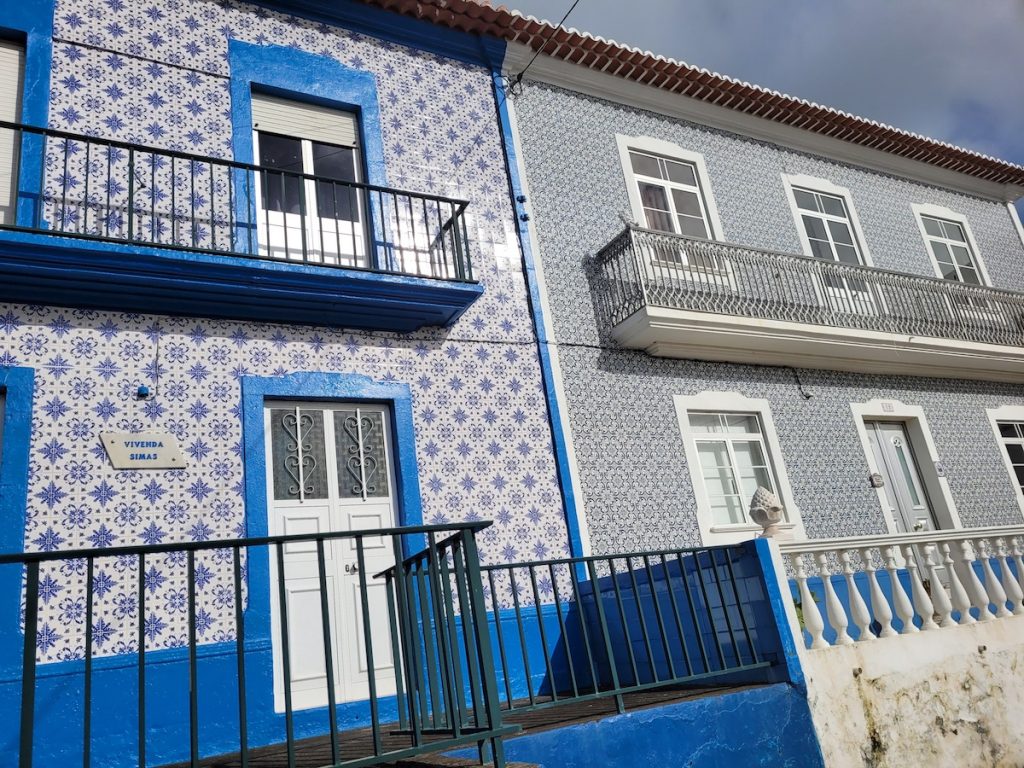 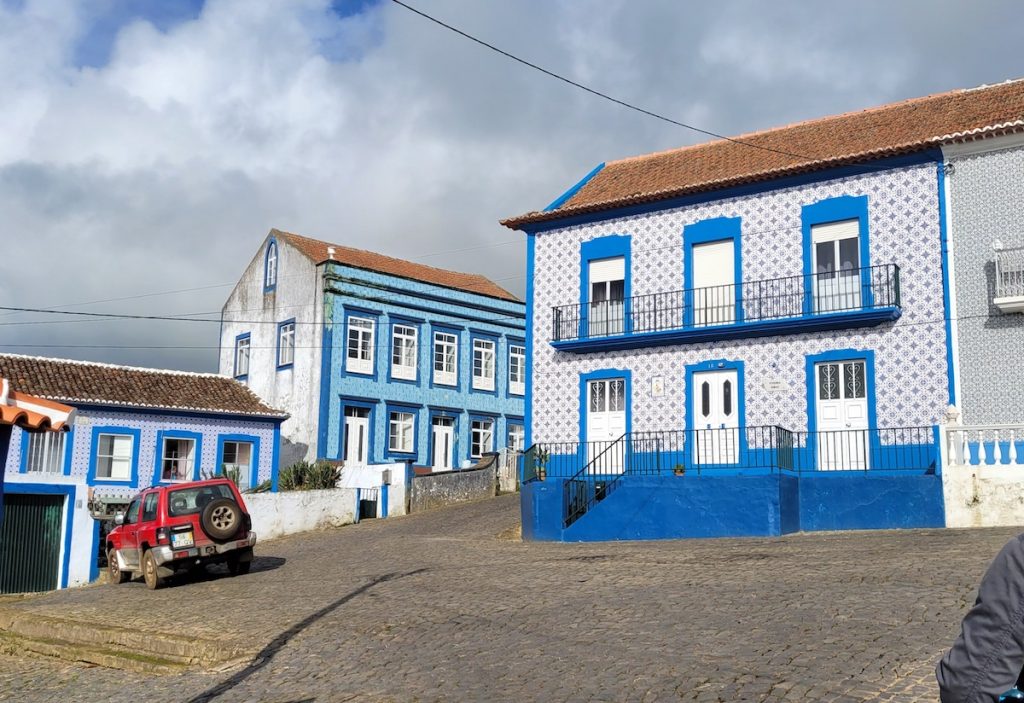 Heading east, we soon found ourselves on the paved road with cow pastures on either side. Looking back, Monte Brasil is visible in the distance … 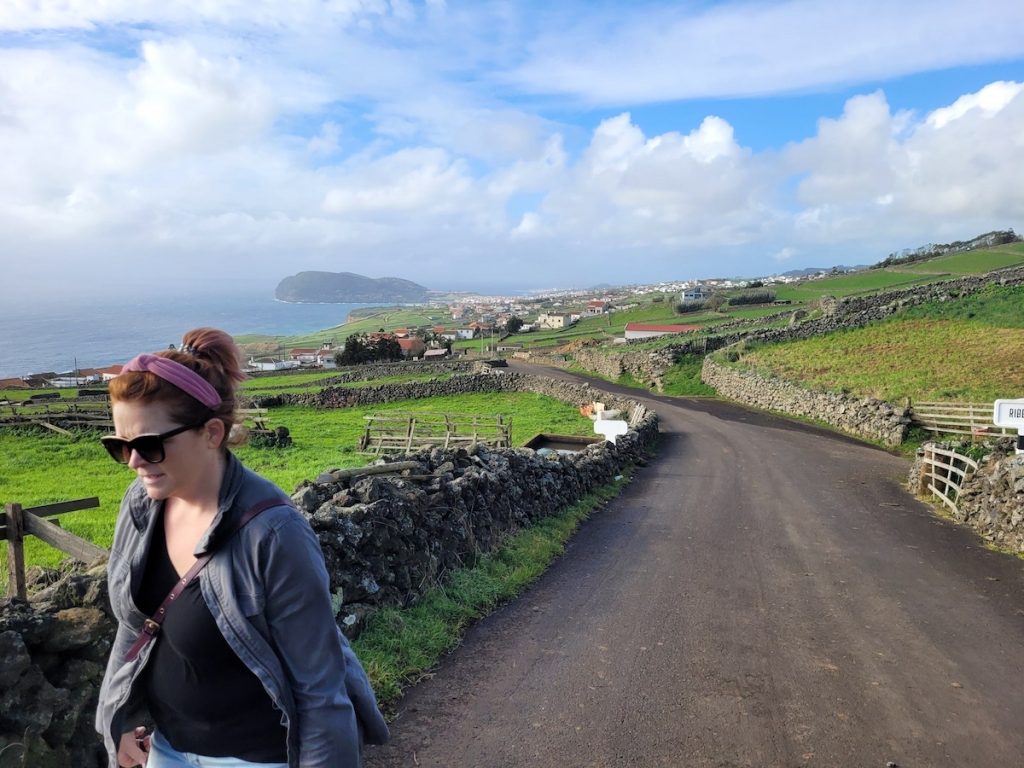 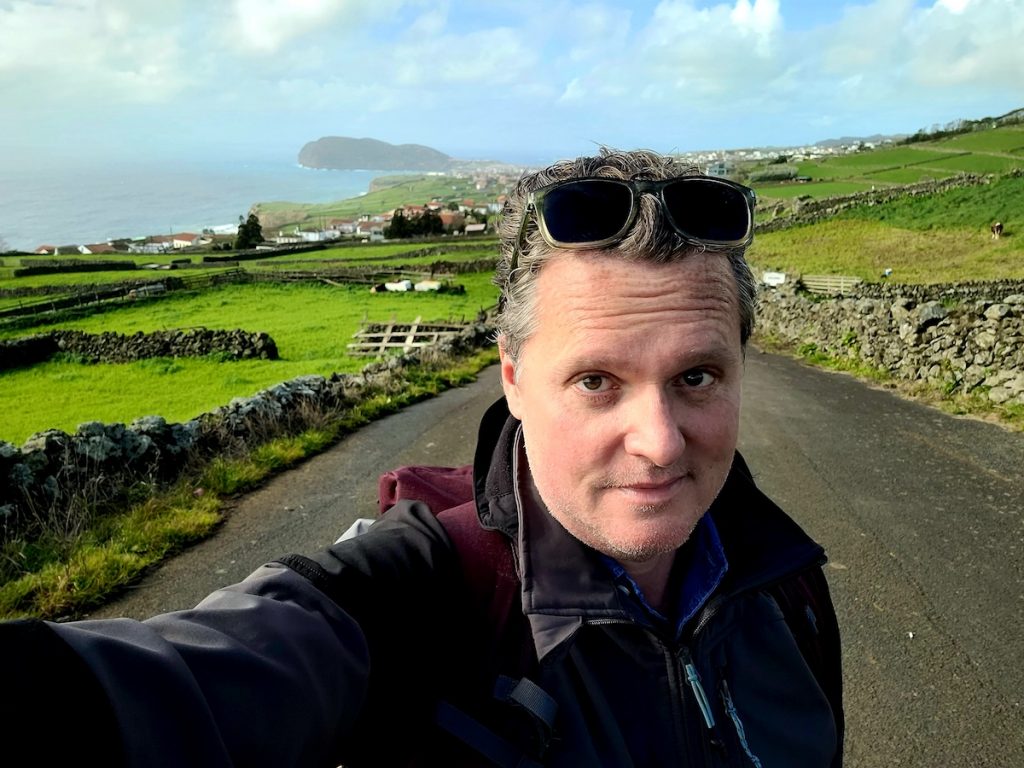 And looking ahead, we could see Pico da Dona inviting us (sorry for the blurry shot): 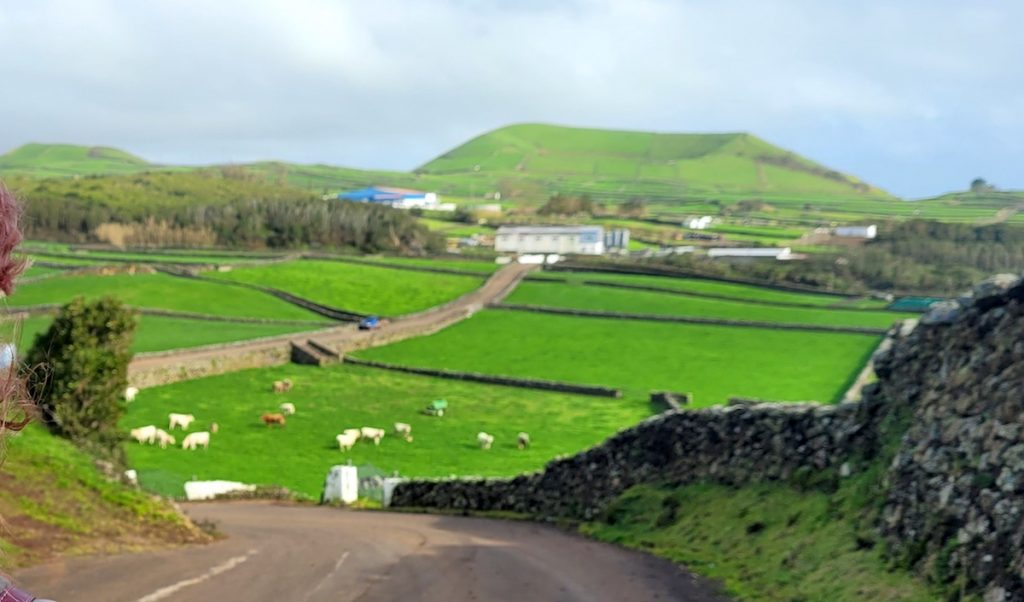 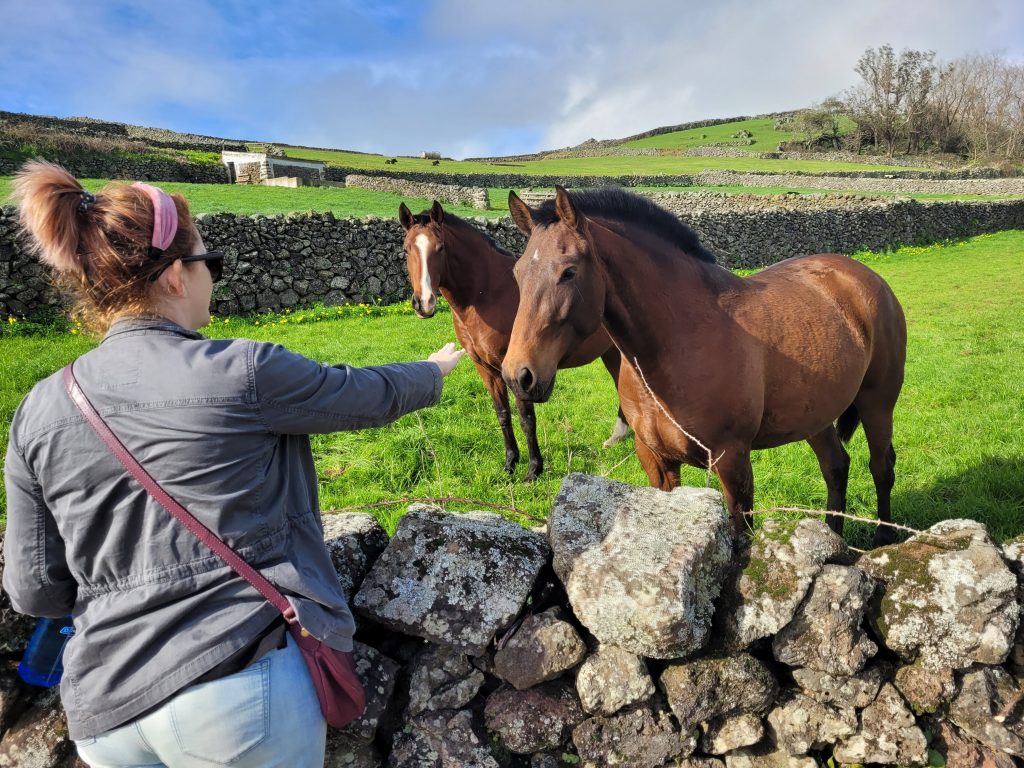 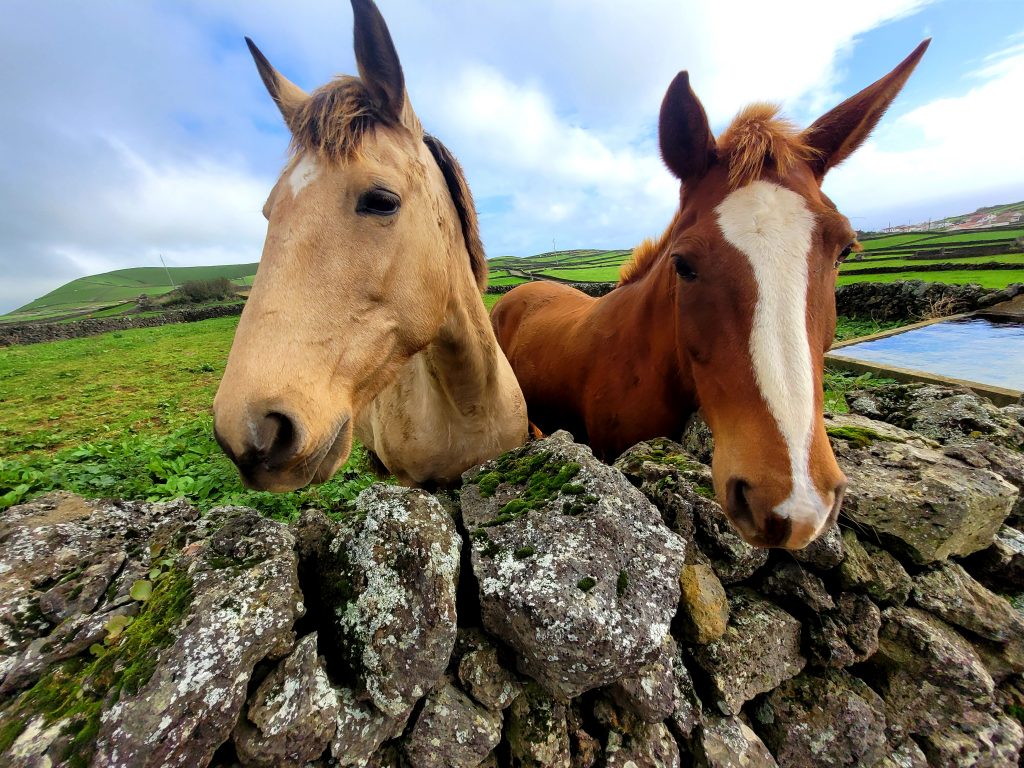 Along the way we even found ourselves stuck in an Azorean traffic jam: 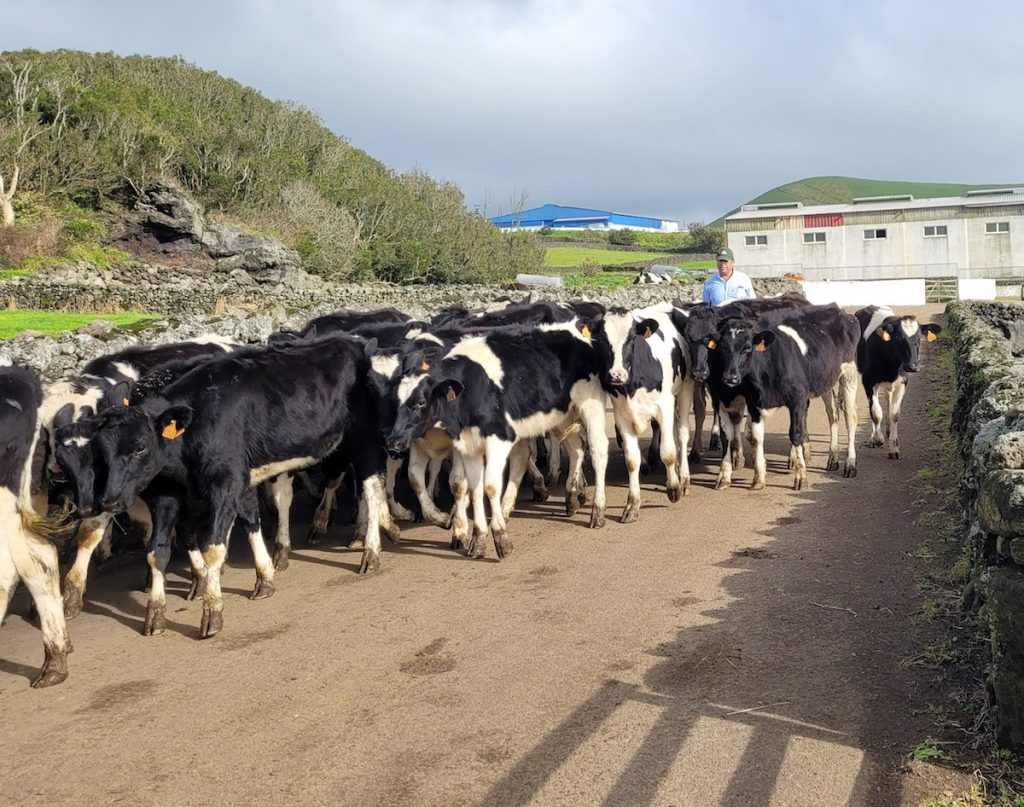 There wasn’t a direct path to the caldera, so we had to meander around a lot of rock walls, open some gates (always making sure to close them behind us), and even climb a wall or two. But we finally got there, and it was gorgeous. It was much deeper than we expected, and there were sheep and cows grazing there: 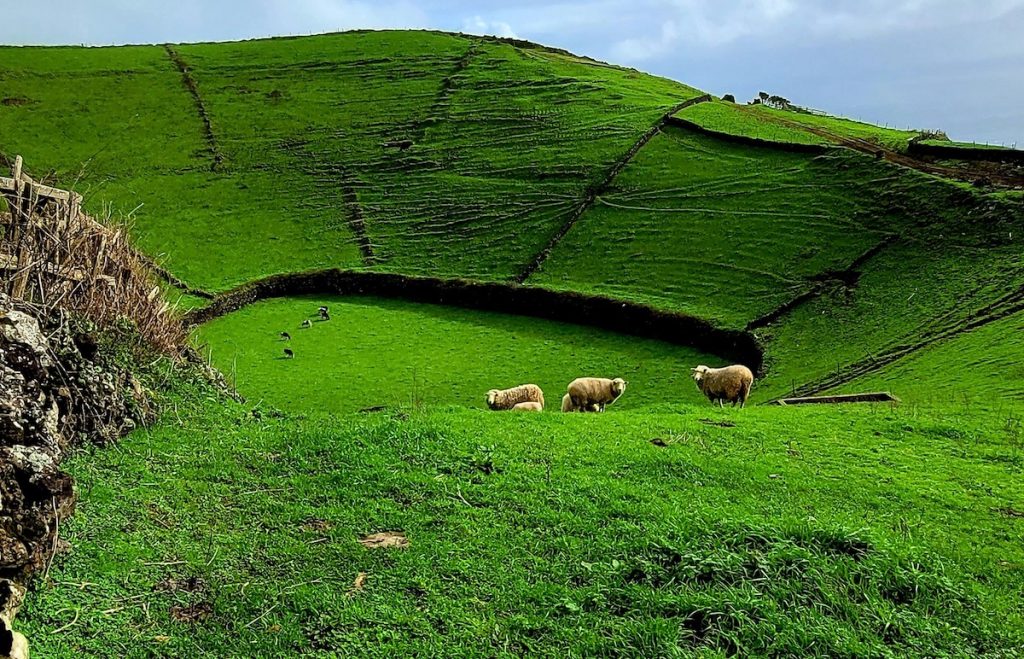 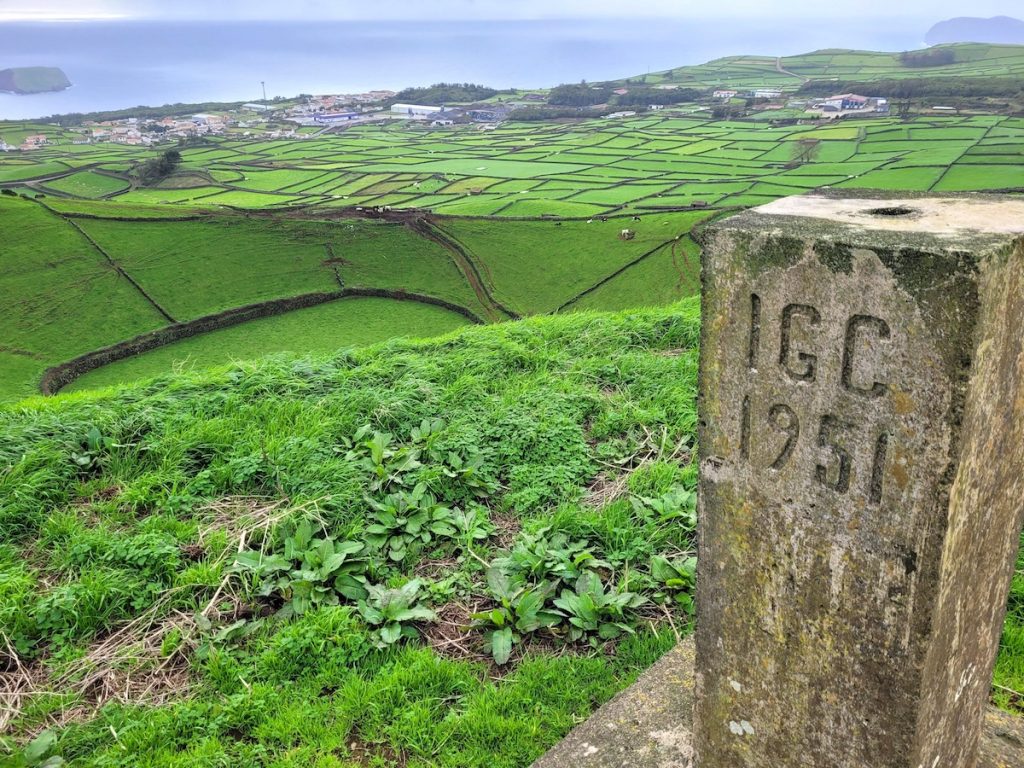 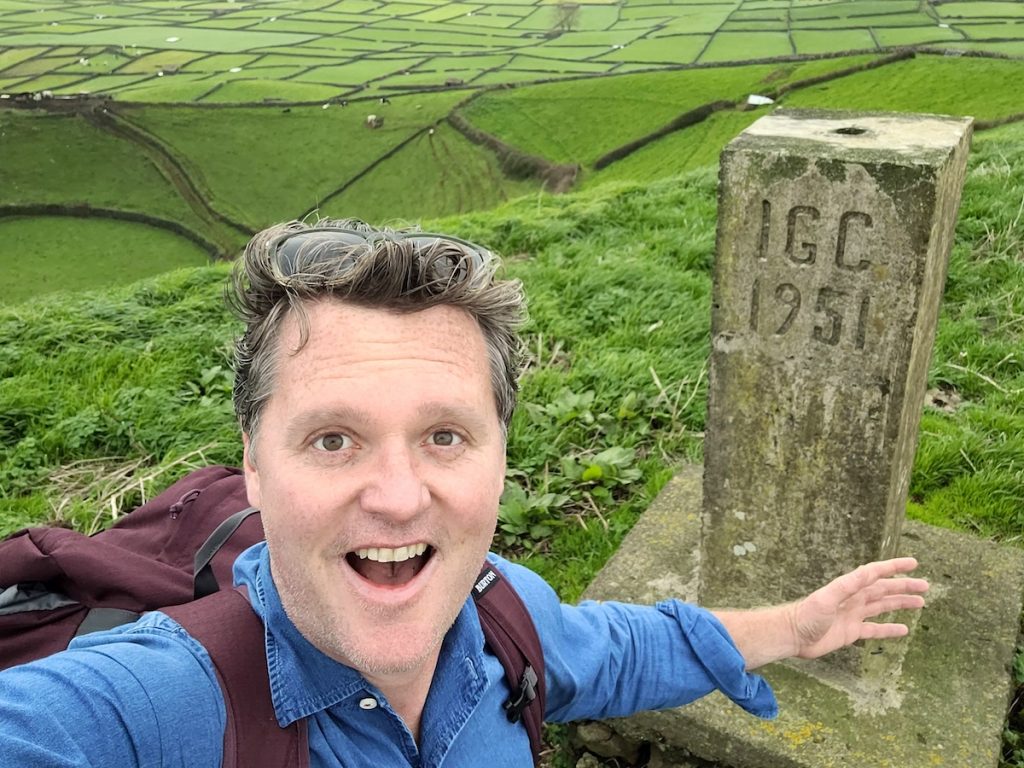 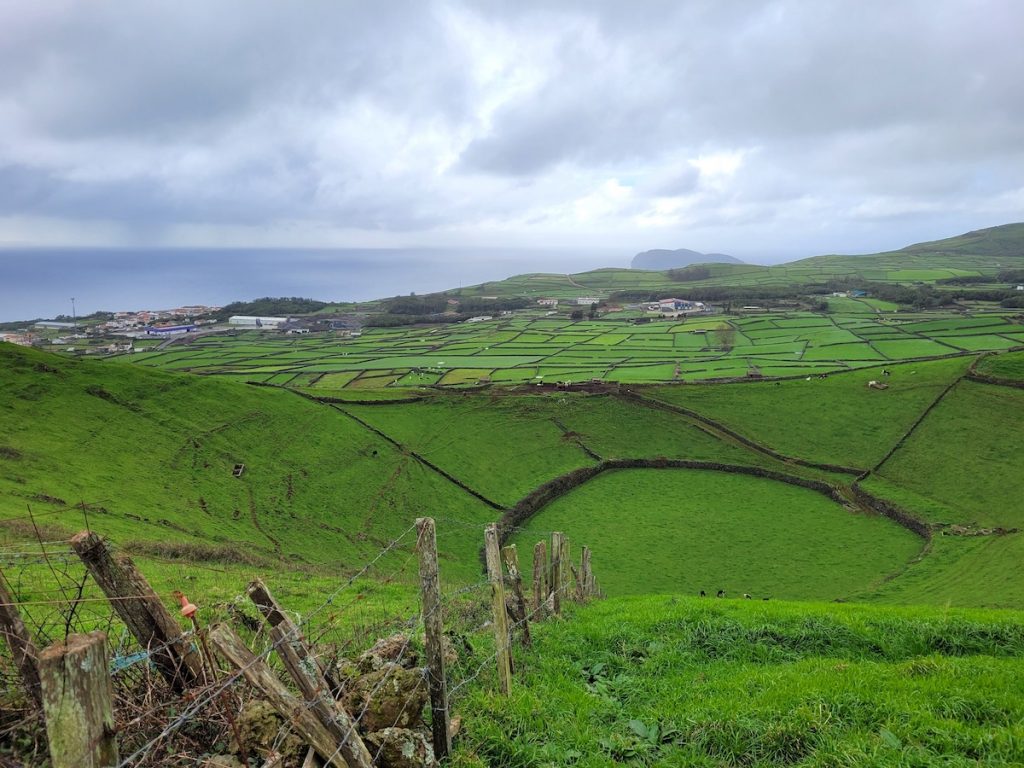 We came back on the main road, so we were able to drop in and visit a free exhibit at Carmina Galeria in Feteira. 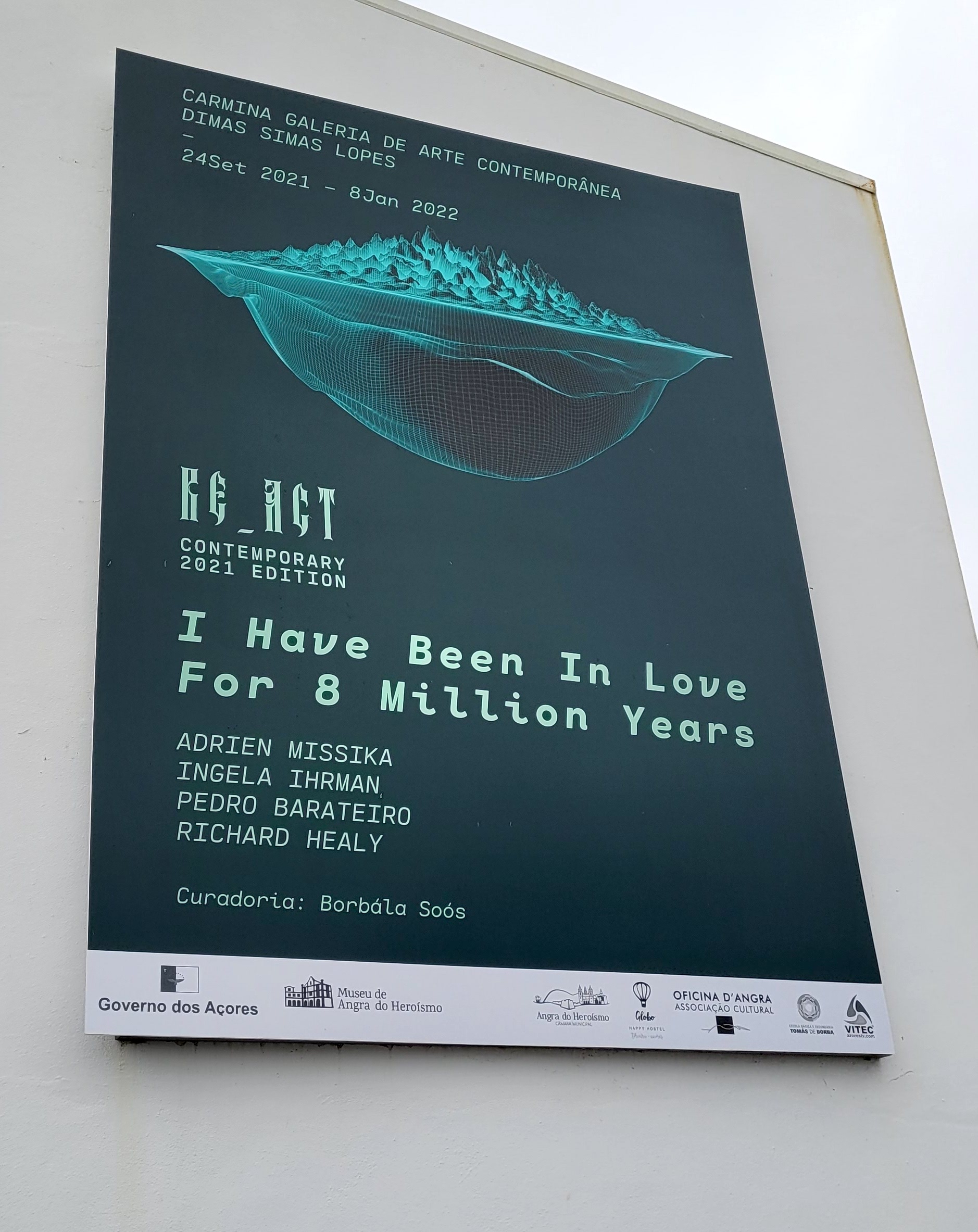 This Facebook post from Trilhos de BTT – Ilha Terceira has some good info about Caldeira dos Cinco Picos, where Pico Malhão and Pico Dona Joana are located. Some of it follows:

Known as a “milk basin” due to the immense pastures that exist there and where dairy cows are raised, Caldeira dos Cinco Picos is apparently a “strato volcano” whose caldera has a diameter of about 7 km. Serra do Cume is concave to the southwest, while the Serra da Ribeirinha is elongated in a NW-SE direction.

Pico do Malhão is the highest cone of Cinco Picos (the highest point is named Ginjal and is 482 m …. it has a lagoon with the same name at its base.) Pico Dona Joana… has in its interior a caldera that is used as grazing land and in its highest part (about 334 meters of altitude at mean sea level) there is a geodesic marker, where the video was recorded (in the link above).